All living creatures on earth need salt to survive, from butterflies to humans and even goats, and ingesting it is the best way to get what we all need. As humans, you and I can go to a store and buy all the salt we need to stay healthy.

In nature, animals have to hunt for natural salt deposits to fill their needs. Why do goats lick salt?

Goats lick salt because it provides essential nutrients and minerals like sodium for proper function of muscles, nerve endings, and brain function which requires salt for electrolytes. Salt balances the fluids inside the goat’s blood and maintains correct blood pressure. In nature, goats will make regular visits to salt resources and farmers use artificial salt licks to maintain wildlife.

Are Goats Attracted To Salt

Goats are more than just ‘attracted’ to salt. They require it to survive. A goat will travel dozens of miles to reach a salt lick if they have to.

However, with the encroachment of humans into their natural habitats, it’s not as necessary for them to travel such long distances. The reason is alarming.

Humans have salt. I don’t mean the kind we put on our food, but rather the salt we possess naturally in our sweat and urine.

A desperate goat will go after a human to get our salt. Goats will lick puddles of human urine for its salt, and they will even lick a sweaty hiker if they can find one.

It seems unlikely but check out the video below to see just how insistent they can be.

Why Do Mountain Goats Lick Salt

Mountain goats are no different from other animals. Their bodies require salt to function. Since naturally occurring salt licks are randomly disbursed, they must travel significant distances to reach the salt.

You may have seen a mountain goat licking the side of the mountain. As odd as it looks, this is just them doing something perfectly natural and vital to their continued survival.

They don’t just climb and lick rocks for their amusement. Mountain goats are licking salt and other minerals.

Can You Give Goats Table Salt

You can technically give goats table salt, but it’s not a good idea. Goats need a mix of minerals and salt, and most tend to do better if the minerals have some salt inside.

You can supplement with a salt lick, but this isn’t always the easiest option, especially if you live in a damp environment where the salt will dissolve more quickly.

Some goat guides also recommend adding salt to the goats’ water. However, it’s best to consult with a veterinarian or other goat specialist before you add anything to your goats’ water or start offering them table salt.

Salt licks for goats are also known as mineral licks. Salt is a mineral, and it is only one of several that goats need to stay healthy. In nature, a salt lick is one of very few ways goats can get salt into their bodies.

According to Bentoli, “There are nine types of minerals goats require to maintain health; selenium, zinc, copper, calcium, phosphorus, iodine, iron, manganese, and sodium. A mistake many novice farmers make is feeding their herds large amounts of grain-based goat feeds… Goat diets shouldn’t include more than 10% of grains. A grain-heavy diet will lead to constipation and poor health. In addition, many grains are high in phosphorus and low in calcium.”

What Is The Purpose Of A Salt Lick

The primary function of a salt lick is to provide essential minerals to animals. Typically herbivores seek out salt licks as carnivores, and omnivores get more of their dietary mineral needs met by eating other animals and insects.

While the exact balance of minerals varies by species, all animals need salt and other nutrients.

Salt licks occur naturally. Although supplementation is what animals use them for, the salt licks don’t exist because of the animals that need them. Instead, these minerals and salt deposits result from the way the planet is formed.

Why Do Goats Need A Salt Lick

Goats need a salt lick for all the reasons I have already mentioned, but there’s something else. When you raise goats for milk or meat, they need to maintain a healthy weight to be useful.

A too-thin, unhealthy milk goat won’t give much milk, and a scrawny meat-goat with little muscle will not offer you much food.

I recommend UMAID 6 lbs Himalayan Animal Lick Salt On Rope for Livestock from Amazon. Himalayan salt is known for its mineral-dense composition.

In fact, Himalayan salt has over eighty trace minerals to help keep your goats healthy. Your goats will love UMAID. 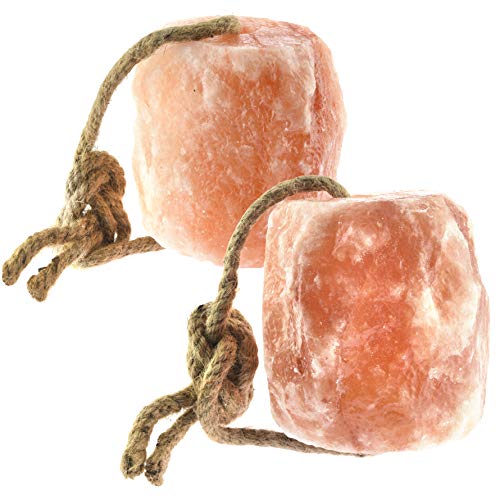 Are Salt Licks Bad For Goats

Some salt licks are bad for goats. Unfortunately, goats like salt so much that they will tend to overdo it if given a choice.

By removing white and yellow salt licks, you can help minimize this problem. Instead, ensure that you provide your goats with a salt that is mineral-dense like Himalayan pink salt or opt for a food supplement that contains the salt they need.

However, it would be best if you did not do both.

Helpful Tips To Know About Why Goats Lick Salt

Salt is a dietary necessity for all living creatures on earth, but how they acquire it varies from one species to the next. For many animals like goats, a natural salt deposit or salt lick is the best source.

Here are more helpful tips to know about why goats lick salt.

Although goats can occasionally become aggressive and scary about their pursuit of salt, they are only doing what all creatures do in order to keep living.

Goats lick salt because they need it in order to survive. With no salt, a goat’s brain, muscles, and nerves will stop working correctly.

Additionally, their blood fluid level goes off, which makes it very difficult to accomplish the acrobatic and climbing activities that normal goats do.

In extreme circumstances, a salt deficiency could even kill a goat. Fortunately, their instincts drive them to seek out salt.

link to Why Do Goats Eat Tree Bark

Goats need shade in summer just like any other creature, but if you let them too close to your trees, they may eat the bark off. Once your goats strip a ring of bark off a tree, it will die because...

Continue Reading
link to Why Do Goats Drink Their Own Urine

Goats have some unsavory personal habits, at least by human standards. For example, they pee on themselves, and in many cases, even drink their urine, which may seem gross o us, but can be essential...